Audio Equipment
“This is getting to be a habit.”

That’s how I ended the first paragraph of my review of Bowers & Wilkins’ 800 Diamond speaker, in the May 2011 issue; apparently, Stereophile‘s habit of reviewing models from B&W’s 800 series remains unbroken.

Later in that review, I said that “The 800 Diamond doesn’t look radically different from its predecessors.” That doesn’t apply to the 802 D3 Diamond ($22,000/pair). It’s still a three-way system with tapered-tube high-frequency and midrange enclosures, stacked and nestled into a generous bass enclosure that’s vented on the bottom into the space between it and its plinth. But other than that, the 802 D3 radically differs from the previous generation: only eight components are retained. Four of those are the binding posts, another is the diamond-dome tweeter, and the remaining three are trivial. According to Martial Rousseau, B&W’s head of research, “This is not a product update. This is a completely reimagined entity.”

Description
When I set-up the 802 D3s, the first thing that struck me was that they were taller than the 800 Diamonds. That, coupled with the change from a boxy support plinth (which also housed the crossover) to a flat, 1″-thick aluminum plinth, suggests that the bass enclosure is of significantly greater volume. Indeed, the 802 D3 weighs only 17 lbs less than its older and broader brother. Another striking change in appearance is the 802 D3’s silvery Continuum midrange cone, which replaces the iconic yellow Kevlar of the 800 Diamond’s cone. Continuum is a coated, woven material that B&W developed over the last 8 years, intended to perform like Kevlar in reducing the magnitude and duration of cone breakup—but to much higher degrees. 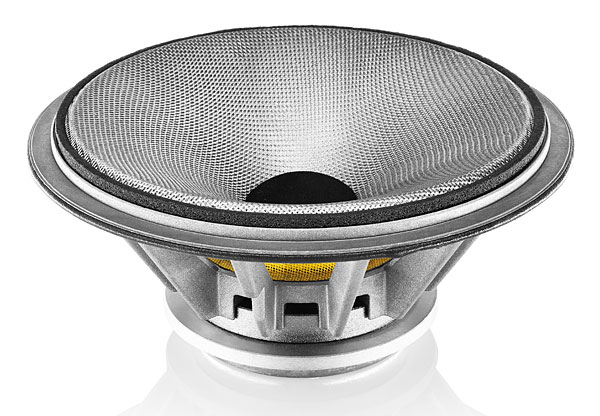 The diaphragms of the 802 D3’s woofers are also of new design and material. Although similar in appearance to the older Rohacel laminate cones, albeit with smaller dustcaps, the new diaphragm has a foam core of varying thickness: thinner at the central voice-coil, thickening with increasing radius, then thinning again as it nears the surround. B&W calls this shape Aerofoil, and claims that it combines maximal stiffness with minimal mass. When I tapped and scratched it, the 8″ Aerofoil cones sounded considerably more dead, and felt more compliantly mounted, than the 800 Diamond’s two 10″ Rohacel cones.

The 802 D3’s woofers protrude from their enclosure because the front of the latter is curved—a reverse of the design of earlier 800s, which had flat fronts and curved rears. The change was made to enhance cabinet stiffness where it counts, and to minimize edge diffraction, though I wonder if the latter is significant at the frequencies involved. Nonetheless, one consequence of the curved front is that the woofers can’t be mounted directly to it; instead, they’re attached to metal cylinders that emerge from the front. These cylinders are rigidly secured to an enclosure made with the latest version of B&W’s Matrix, now made from plywood and aluminum and pressure-fitted to the main body for enhanced structural rigidity. A concomitant consequence of the new shape is that the rear of the 802 D3 is a single, massive aluminum heatsink that runs, like a keel, the cabinet’s entire height. The crossover network is mounted on the inside of this heatsink, the four binding posts on the outside, at the bottom, and the top is milled out to accommodate the rear of the loudspeaker’s Turbine Head: the vaguely oil-drop-shaped structure that houses the midrange driver and supports the tweeter.

The tweeter and midrange enclosures are completely re-engineered and, while the midrange enclosure was previously made from Marlan composite, both are now machined from solid aluminum. An ancillary benefit of the tweeter-housing redesign is that it can be more easily removed and replaced if the Diamond tweeter is damaged. Of course, it’s also less likely to be damaged in the first place: the 802 D3’s protective tweeter cover is now fixed, to prevent any untoward contact with the dome.

Also reengineered are the metal frames of the midrange and bass drivers, to increase stiffness and reduce resonances. At public demonstrations, B&W illustrates the effectiveness of their new design by suspending from cables “empty” samples of the new and old tweeter housings and midrange baskets and inviting attendees to strike them. The old ones sound brightly musical, like bells or triangles; the new ones respond with a dull clunk. Here in my listening room, my 800 Diamonds sat right next to the 802 D3s, and I wondered if the striking (!) difference would still be audible when the housings were fitted with drivers and securely mounted in finished speakers. As expected, the differences were small, but responses from the D3’s driver rims were higher in pitch, and definitely less lively. (For additional technical and philosophical issues, see the separate article on my visit to Bowers & Wilkins.)

The overall appearance of the 802 D3 is more streamlined and less plush than earlier 800 models. The review samples, finished in Gloss Black (Rosenut is also available), came with black grilles for the midrange and woofers, but I preferred using only the midrange grille, perhaps only until I adapt to the change in diaphragm color from yellow to silver. On the other hand, the vertical array of exposed woofers and the midrange and tweeter modules formed a visual motif reminiscent of the original Nautilus, while the racetrack-shaped woofer grille looked ungainly. The 800 Diamond’s Turbine Head was embedded in the bass enclosure and embraced by a ruff of Connolly leather; the 802 D3’s Head is nestled into a shallower saddle on the bass enclosure, isolated from it by hidden compliances. By fanciful analogy, 800-series styling has moved from the Elizabethan to the Edwardian age.

Music and Coffee the perfect start ...

Thanks to the design borrowed from ...